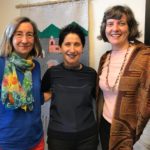 Pre-Texts is an expansion of critical pedagogy using the arts to create democratic discourses and connections between university and the world for social transformation. Pre-Texts is part of Cultural Agents (culturalagents.org) at Harvard University: “arts and humanities in civic engagement.” Pre-Texts is an approach to the humanities and to social change, grounded in student-centered learning. The handmade books from recycled material (Cartonera) in Latin America, and the art activism of Antonus Mockus, former mayor of Bogata, are two example of art in the world.

Doris Sommer, Ira and Jewell Williams jr. Professor of Romance Languages and Literatures and of African and African American Studies at Harvard University and Vialla Harfield-Mendez, in the Department of Spanish and Portuguese, and Professor of Pedagogy at Emory University, joined me in a conversation on May 24, 2017 at Emory. They talk about Pre-Texts origins and evolution, the train-the-trainer pedagogy sessions, and the re-imagining of the humanities in the world. The tangents they follow provide examples of new ways of defining leadership, learning, and innovative change practices.

The foundational sources by Doris Sommer include her edited book, Cultural Agency in the Americas (Duke University Press, 2006) and The Work of Art in the World: Civic Agency and Public Humanities (Duke, 2014).